New warehouses with a cumulative 22,000 metric tonnes (MT) capacity  are currently being constructed across the country and will soon be added to the existing storage capacity.

Each of these warehouses has a storage capacity of 1,000 MT, which implies that 22 warehouses are now under construction. This will bring the entire total capacity to 80,000 MT.

Altogether, 80 warehouses were initially earmarked for construction, with 50 of them under the One District One Warehouse initiative and the remaining 30 being directly provided by Government.

Regarding the warehouses under the One District One Warehouse initiative, 41, representing 82 percent have been completed and are ready to be handed over to the Ministry of Food and Agriculture and the National Food and Buffer Stock Company (NAFCO) whereas the remaining nine are expected to be completed by September this year.

But 17 of the warehouses being directly provided by Government have been completed, with the remaining 13 scheduled for completion by end of December this year.

This means that a total of 58 warehouses, with cumulative 58,000 MT capacity are complete and ready for use as against the 46,000 MT announced by NAFCO.

This implies that currently, Government still has a deficit of more than 140,000 metric tonnes capacity that it wants to work on in reducing post-harvest losses.

According to NAFCO, the Company has put in place all the necessary measures to accommodate all the surplus that could arise due to a bumper food harvest. Each of these completed warehouses contains ancillary facilities including offices and laboratories, among others.

Post-harvest system comprises a range of interconnected activities – that is from the time of harvest through to processing, marketing, preparation, and finally consumption decisions at the consumer level. 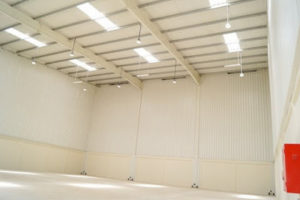 ntities of food stuffs, particularly cereals, are wasted at each of these stages before getting to the consumer.

Assessments indicate that various farm produce estimated at more than US$700,000 is lost in Ghana annually through post-harvest losses, with cereals being the most hit.

Recent data compiled by the Africa Post-harvest Losses Information System (APHLIS) – a private sector initiative on post-harvest losses in the sub-region – indicate that Ghana’s post-harvest losses from its four top cereals – these being rice, maize, millet and sorghum –  were valued at closed to Ghc 690 million.

In effect, the country loses more than one tenth of these cereals produced to post-harvest losses annually due to impediments along the entire supply chain.

Stakeholders in the agriculture sector are lamenting as the situation tends to impede efforts at ensuring food security and in turn makes farming in the country unattractive, while poverty levels in Ghana remain high.