Downward trend in inflation would reinforce desire to reduce yields

Doobia.com’s analysts believe that falling inflation will shortly result in lower interest rates even before the Bank of Ghana’s Monetary Policy Committee has a chance to cut its benchmark Monetary Policy Rate at its next meeting in January 2012

Ghana’s consumer inflation dropped to within the central bank’s target band of 6-10% for the first time in eight months. Headline inflation dropped by 30basis points (bps) to 9.8% in November 2020 from 10.1% in the previous month. This was attributable to a 90bps drop in food inflation to 11.7% from 12.6% in October on the back of availability of recently harvested food crops in the market. 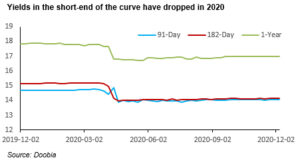 The downward trend in inflation in the last four months would likely reinforce the government’s desire to drive down interest rates as part of measures to reduce the domestic cost of borrowing in the midst of heightened financing needs occasioned by the impact of the coronavirus pandemic on the local economy. It has become imperative for the authorities to drive down treasury yields given the increased financing needs that could increase the country’s debt service burden beyond 50% of government revenue in 2021. Consequently, we expect treasury yields in the short-end of the yield curve, which is the most active, to continue to drop in the short-term.

However, we believe that there are potential upside risks to inflation in December as a result of increased spending related to the elections and festivity as well as potential desire by retailers to take advantage of the increased demand to hike prices. Despite this, we expect the Monetary Policy Committee (MPC) of the BoG to confirm the desire of the authorities to drive down interest rates by reducing the policy rate by around 100bps in the first quarter of 2021, but whether this would be done in January or March depends on the outcome of December inflation, which would be released ahead of the first MPC sitting of the year in January 2021.

Ghana is Finally Getting the Skate Park It Deserves