Uncertainties in the food sector amidst the coronavirus pandemic have turned out to be the driving force behind the recent hikes in prices of food produce in the country. In turn food inflation of 15.1 percent in May, has driven overall consumer inflation to 11.3 percent, despite headline inflation being restrained by much slower non-food inflation of 8.4 percent.

Trend analysis of data from Ghana Statistical Service (GSS) indicates that inflation, which is currently on an upward trajectory, has been driven by the food sector for the past few months. Food currently contributed 58.6 percent of the overall inflation for May 2020.

The national year-on-year inflation rate was 11.3 percent in May 2020, from 10.6 percent recorded in April, 2020, representing an 0.7 percentage point increase.

This is the second consecutive month in which inflation has exceeded the Bank of Ghana’s target band of between 6 percent and 10 percent. Instructively, during the half year before the COVID 19 pandemic fully reached Ghana, inflation has been below the mid-point of the target band, of 8 percent.

In an interview with Goldstreet Business, the CEO of the Chamber of Agribusiness (Ghana), Mr. Anthony Morrison said, generally, the uncertainty surrounding the availability and consumption is a contributing factor to the hikes in food prices.

“Overly, people are also hoarding food produce due to the uncertainties. In the past month’s consumers are no longer buying from the market, but are going to the farm gate, thereby competing for the same produce that are destined for the cities.”

“Prices of Vegetables, cassava-based products and maize have all increased. The prices have increased primary because these are the most consumed food stuff, whereas productivity has generally declined in the past months,” Mr. Morrison stated.

The Consumer Price Index (CPI) measures proportionate changes in the prices of a fixed basket of goods and services that households in Ghana consume.

“Ghana has experienced a hike in the inflation rate by around 3.5 percentage points since the outbreak of the COVID-19 pandemic” the Government Statistician, Professor Samuel Kobina Annim said. 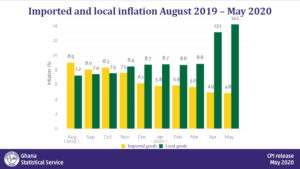 Consistently over the past seven months, inflation with regards to prices of locally produced goods has been higher than that for imported goods.

This has resulted in a total change trend observed over the years, where inflation for imported goods have been higher compared with locally produced goods.

The GSS attributes the high inflation for locally produced foods as the main contributor to local inflation.