At a brief ceremony, GIZ handed over 2,000 protective goggles, 10,000 boot covers, and 95 knapsack sprayers, which were received by a team of Police Management Board Members led by the Director-General Research & Planning, Commissioner of Police Mr. Nathan Kofi Boakye. In expressing gratitude to the German Embassy and GIZ, COP Kofi Boakye pointed out that “by having these protective equipment, which will be distributed to police divisions, police officers can also render their services from safe working environments for citizens and themselves, by regularly fumigating Police Stations including cells”. 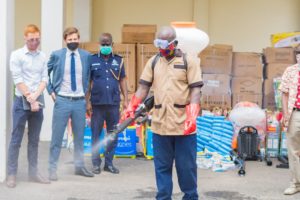 Commissioned by the German Government, GIZ is supporting police services in nine African countries, at the G5-Sahel Secretariat, and the African Union. The programme, which has been implemented since 2009, was recently extended to Ghana, where the GPS and GIZ will cooperate on reforms in training systems, accountability, and community policing. The jointly developed measures will be implemented until the end of 2022.

“Aligned to the Ghana Police Service Transformation Programme, our Police Programme strengthens Ghana’s police in their reform initiatives to improve training capacities, establish functioning and known accountability measures, and further implement their community policing approach to contribute to human safety and security. However, at the onset of COVID-19, it was important for us to support the government of Ghana through our partners the Ghana Police Service, in their preventive measures against the pandemic”, Attaché Political and Protocol Section at the German Embassy, Mr. Philipp Kauke highlights.