President Akufo-Addo has promised to give out his best in the next four that Ghanaians has given him to steer the affairs of the nation.

Speaking at the last meeting with members of the 7th Council of State at the Jubilee House yesterday, he noted that “guided by Almighty God and the teachings of the holy scripture, my case as a Christian, is to do the best that you can and that is the assurance I want to give you and the people of Ghana that I will continue to discharge my functions to the very best of my abilities and I hope that in so doing, I will fulfill the expectations of the

“I have been humbled by the renewal of my mandate for a second term as President of the Republic by a decisive majority of the Ghanaian people”, he noted.

That, he said imposes on him some very serious and grave responsibilities.

“I will like to put on record that the work of this Council has been excellent and the people of Ghana have had their full money’s worth in your presence and in the structure and the institutional make up of our state and in the way that you have approaches your work”, he said of the Council of State.

Having read the last two reports assiduously, he promised to do same to this one which he said contained suggestion that would help improve the governance system of the country.

“There has never been a moment when I sought the advise the views, the import of the Council of State that I found any hesitation on your part or inability to assist”

For that reason, he noted “I’m extremely lucky as President; I don’t know how other Presidents how they estimated their relationships with Council of State at their time, but I can say with full confidence that I’ve been very lucky in way in which this Council of State has interacted with me”

“I’m therefore extremely grateful for the cooperation that the Council has given me advise which appealed to my better nature”, he said.

He took the opportunity to welcome the latest member of the Council, Ogyeahoho Yaw Gyebi who is the new elected Chairman of the National House of Chiefs. 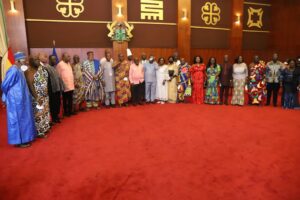 On his part, the Chairman of the Council of

State, Nana Otuo Serebour congratulated President Akufo-Addo on his reelection and expressed their wishes of the success of his next administration which he expected to consolidate the gains made in his first term to leave a lasting legacy.

He expressed profound gratitude to the President for giving them a listening ear throughout the past 4years.

“We note with satisfaction that our suggestions, our recommendations have largely been accepted and implemented by your government” which he said has been a lacuna in the Council since its establishment pursuant to the promulgation of the 1992 Constitution.

The Act, he said will promote greater

efficiency in the work of the Council through the appointment of its own staff, control its own budget line and the regulation of its procedures among others.