The Social Security and National Insurance Trust (SSNIT) says it has paid the difference in past credit due its pensioners yesterday June 11, 2020.

The payments, SSNIT noted, was as a result of implementation of the agreement reached in a Memorandum of Understanding between government and sections of Organised Labour on the interest rate applied to the accrued past credit which is a one-time benefit for pensioners who are due retirement.

The accrued past credit grows at the full 91 – day Treasury Bill rate, compounded quarterly, until the date of payment to the beneficiary.

SSNIT said by this payment it has complied with the agreement signed by the Finance Minister, Employment Minister as well as representatives of sections of Organised Labour.

The implementation of the three-tier pension scheme (Act 766), mandated the Trust (first tier operator) to pay monthly pensions and the second tier fund managers to pay a lump sum which hitherto was being paid by the Trust under the Social Security Law (PNDCL 247).

However, workers affected by the Act 766 who as at December 31, 2009 (i.e. the eve of the implementation of Act 766), had contributed to the SSNIT Scheme were entitled to a Past Credit. 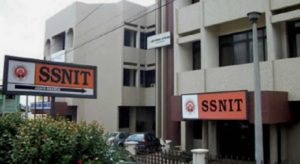 The Past Credit constitutes four percent of contributors’ salaries, accumulated with interest from the dates on which the contributions were received by the Trust, up to 31st December 2009.

This Past Credit plus additional accrued interest, which has been adjusted from 75% to 100% of the prevailing Treasury Bill rate from January 1, 2010, till the date of retirement is what is paid to the Members by SSNIT as part of their lump sum.

The Trust has assured, all would-be pensioners and the general public, that it will at all times pay all legitimate benefits and continuously work to guarantee timely payment of benefits.