Utilize Social Media NOW for your Business: 10 reasons why.

The POWER of Social Media is an easier sell to we the Generation Y business owners (1981-1996). We have a relatively healthy grasp of the before and the aftermath of the internet boom. This aforementioned power of social media is pretty obvious to Generation Z (1997-2012); that’s all they’ve known since they became “aware”.

Making the Leap from Employee to Entrepreneur!

Banking in the Face of Growing Technology

The math tells us that there are 3.96 BILLION active social media users as at three months ago. That word “active” means that many more accounts have been created and almost 4 billion of them are not dormant; they are regularly used.

Considering that there are currently over 7.8 billion people in the world now, that’s half of the entire world population. I wish I could add the statistics for Ghana’s social media activity. I will take Selassy’s advice and write these articles earlier and on time but in the meantime, I could bet you one pesewa that your target market is on the internet, RIGHT NOW.

The frequent question is, how do you reach them? That’s not what I’m addressing today. It should make for a good follow-up article next week.

WHY YOU SHOULD REACH THEM is what we are deliberating. Here are 10 reasons why. 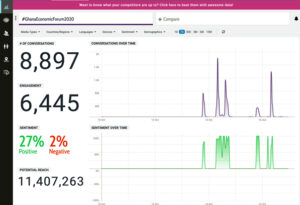 I remember a time when you’d have to get a flat-bed trailer truck, get some sound systems with some marketers dancing to popular music while the truck slowly drives through traffic to bring attention to your product, service or event. It’s called a float! It’s a FLOAT! I remembered the word late but I like the description I gave before so I’ll keep it in.

Well, now, with just the internet and a resonating message, you can reach tens of millions of people in a jiffy as opposed to a street float reaching smaller than a very minuscule fraction of that. Look at the screenshot displayed here. That’s the social media analytics of the 3-day, less-than-a-week, intermittent, non-targeted buzz about the #GhanaEconomicForum on just Twitter.

This is literally magic to the marketers of many decades ago! Get in on that.

Making the Leap from Employee to Entrepreneur!

Banking in the Face of Growing Technology

When the Public ratifies your Business

Ecobank Ghana drags market down despite gains in other stocks

First, Second Deputy Governors of BoG inducted as honorary fellows of the Institute of Directors-Ghana