As the number of confirmed coronavirus cases in Ghana rises by the day, traders in personal protection equipment and consumables such as face masks, hand sanitisers, liquid soaps and even tissues, have consistently been gouging prices of such goods on the market.

This phenomenon has been posing great challenges and worries to the consuming public with regard to how much they have to pay for such essentials.

Similarly, this trend has also affected the price of food stuff on the Ghanaian market as sellers have suddenly and astronomically increased the prices of their goods

A container of gari (olonka) which at the beginning of the month of March was being sold at GHc8.00, has suddenly doubled to GHc17.00. 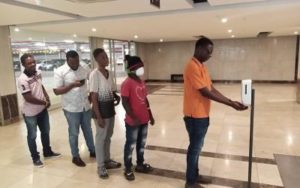 Meanwhile, it remains unclear whether the 100,000 medical masks and the 1000 protective suits and face shields offered to the country by billionaire Jack Ma, will be distributed to a portion of the Ghanaian general population or would only be made available to the country’s health workers.