Although COVID-19 has slowed activities in certain sectors of the financial market, the Ghana Fixed Income Market (GFIM) has remained immune to the shocks of COVID-19, as its is currently witnessing its highest trading volumes since its inception.

Goldstreet Business analysis of the GFIM activities has shown that the volume of trades had increased significantly by 103 percent in the first four months of 2020, compared with the number of trades executed in the same period of 2019. In 2019, the growth rate stood at about 24 percent for the first four months, compared with the same period in 2018.

The trend analysis points out that the current high growth in trading volumes is a continuation of positive trading sentiments which started in the last quarter of 2019.

Importantly, the growth in trading volumes spreads across both government debt securities and corporate bonds. Most of the latter are issued by companies listed on the Ghana Alternative Stock Exchange, GAX.

Some market analysts have attributed the increase partly due to the investors quest for attractive deals across the various maturities on the secondary bond market.

Since the close of March 2020, yields on government securities on the primary market have largely declined due to government’s policy initiative to get commercial banks to reduce interest rates priced-off the Ghana Reference Rate (GRR) by 200 basis points; along with the BoG directive to the banks not to move the excess liquidity created by its monetary easing and reduction in reserve and core capital requirements to the treasury market.

“We expect more price actions for the medium-term securities on the secondary market because that’s where investors appear to be seeing some sweet spots and are therefore, exploiting attractive deals or opportunities across the various maturities on the secondary bond market,” Databank analyst, Courage Kingsley Martey has predicted. 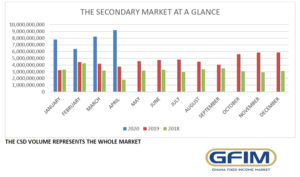 At present, the banks and other investors do not have much option for shorter tenured securities given that the BoG bills also have lower yields, due to the reduction in the Bank’s benchmark Monetary Policy Rate to 14.5 percent, similar to the measure taken by government on the yields of its primary treasuries.

The regulatory measures taken by the Bank of Ghana during its March 2020 Monetary Policy Committee meeting, as well as subsequent measures such as the suspension of the dividend payments by the banks have made available increased liquidity on the market.

The predicament of listed equities