A US$5.3 million 330 /161kV interconnecting autotransformer has been inaugurated at the Sunon Asogli Power Ghana Limited in Tema to bolster power transmission and supply in the country.

It is a joint initiative with the Ghana Grid Company (GRIDCo), which invested US$ 3.3 million, and Sunon Asogli, which put in US$ 2 million.

The project, which commenced full-scale operation on April 15, this year, involves the installation of a 200 Mega Volt Amp (MVA) autotransformer to facilitate the evacuation of about 120 MVA additional generation capacity from the Sunon Asogli power plant onto the national grid.

It will also provide flexibility in system operation by enabling power transfer between the 161 kV and 330 kV networks, thereby ensuring stable and reliable transmission of power.

The additional generation capacity being made available through the project will further make about 1500 gigawatt hours of electricity available per year to the national grid.

The Minister of Energy, Mr John Peter Amewu, who inaugurated the project in Tema yesterday, said Ghana, over the years, had experienced a huge amount of transmission losses and power thefts as a result of obsolete equipment across the country.

He said the development had got to a stage where temporary outages could no longer be tolerated.

Mr Amewu commended Sunon Asogli and GRIDCo for taking the initiative to expand the system.

He explained that the successful completion of the project would lead to increased evacuation of power from the Tema Power Enclave and alleviate congestion on the transmission lines to ensure stable power transmission and supply. 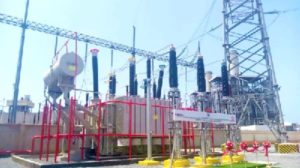 The minister said to ensure reliable power supply, the Electricity Company of Ghana (ECG) and the Northern Electricity Distribution Company (NEDCO) had also embarked on a programme to replace their obsolete equipment to enhance their distribution of power.

He, therefore, called for cooperation from all customers who, he said, would experience outages from time to time during the period of replacement since the project was in their interest.

The Chairman of Sunon Asogli Power, Mr Yang Qun, applauded the outstanding collaboration between GRIDCo and Sunon Asogli that made it possible for the project to be completed within four months.

He said as the first and largest independent power producer (IPP) in Ghana, Sunon Asogli was committed to delivering an efficient energy sector to help grow the economy of Ghana.

He, however, noted that over the past year, the energy sector had faced numerous challenges, with outstanding debts being the most daunting.

“We have been working tirelessly with all stakeholders and other IPPs to try to resolve this challenge. I am particularly pleased with how the minister and his ministry are also working very hard to ensure our debts are paid soon,” he said.

The Chief Executive of GRIDCo, Mr Jonathan Amoako-Baah, said his outfit’s commitment to maintain a stable electricity grid had received a further boost with the completion of the project.

He assured Ghanaians that they would work to deliver on their mandate while remaining the backbone for power delivery to many countries in the sub-region.