Why Africa’s animation scene is booming

“I would go to a cyber café, watch video tutorials and write down whatever I’d learnt,” he says.

Today, the 26-year-old is a rising star in Africa’s blossoming animation scene.

Two years ago, he was recognised by the Cartoon Network Africa Creative Lab for his animation Garbage Boy and Trash Can.

In what must have felt like sweet revenge, his cartoon was inspired by a bad experience at high school, involving a rubbish bin and school bullies. 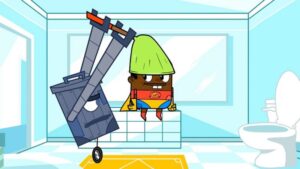 “Garbage Boy is basically me,” he says. “I was bullied and called names.

“I decided to create Garbage Boy as a beacon of hope and forgiveness. And to show others who had been bullied that those names don’t define who you are.”

He has since formed a production company and he’s now hoping to have his latest idea, a cartoon set in Lagos, called In My Hood, commissioned into a series.

Surprisingly, Ridwan Moshood’s journey into animation, is not particularly unique.

“All over the continent we hear these stories,” says Nick Wilson, the founder of the African Animation Network, who is based in Johannesburg.

He reels off a list of countries where local animators are starting to make their mark: Nigeria, Ghana, Kenya, Uganda, Egypt, South Africa, Mozambique and Burkina Faso.

“Wherever we’ve been able to scratch the surface and connect the community, we’ve found pretty exceptional talent and the majority of this talent is self-taught,” he says.

But while stories of self-taught animators breaking into the industry are inspiring, more formal training opportunities do need to be developed, he says.

Doh D Daiga is a Cameroonian animator who lives in Burkina Faso. He’s responsible for skills and development at the African Animation Network.

“My experience in this industry shows me there exists an immense pool of young, talented and creative minds that never get to the see the day,” he says.

“The only problem keeping Africa behind is a lack of training.”

Recently, partnerships have been announced with international animation studios Toonz Media Group and Baboon Animation. Both companies plan to establish animation academies in Africa, adding to the handful that exist already. 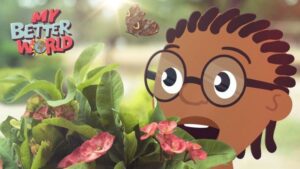 Despite the scarcity of formal training opportunities, locally-made productions are already starting to take off.

Chris Morgan of Fundi Films was able to draw on a pan-African talent pool for his recent production, My Better World.

The educational series aimed at African schoolchildren and young teenagers involved a team of creatives working remotely across the continent.

“We had over 100 producers working in seven different countries, and this was pre-Covid,” he says, speaking from Mpumalanga, South Africa.

The end result is a series made up of 55 short animated films that are available in English, Swahili, Hausa and Somali.

In each episode, the characters navigate complex situations – such as negotiations about early marriage – but in a lively and accessible way. As well as a cartoon, each film features an interview with a real-life high achiever, such as Africa’s first female pilot.

When it was broadcast in Kenya earlier this year, My Better World quickly became the top rating children’s TV show. It was also nominated for this year’s Annecy International Animation Film Festival, one of the world’s top animation competitions.

But not all African animation work is aimed at the young. Nairobi-based artist and animator Ng’endo Mukii uses the medium to tell stories that are challenging and at times, confronting.

Her most famous film, Yellow Fever, tackles the use of whitening creams by African women.

“I wanted to look at the way women are using skin bleaching products in Kenya, and what we believe is beautiful,” she says, adding she wants “to know why”.

Other themes covered in her work include migration and people smuggling.

For Ng’endo Mukii, animation is the ideal way to approach sensitive or hard-hitting issues, especially when case studies are involved. 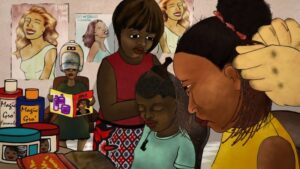 “Animation allows people to have an anonymity and a distance between what they say and how others perceive it,” she says.

It also allows people to “not feel necessarily attacked by what you’re discussing, so they can maybe engage with it a bit better”.

Her work has received numerous international awards including the Best Animated Short at the Chicago International Film Festival for Yellow Fever in 2013.

At the same time, foreign companies such as Pixar are hiring Africa-based animators to carry out production services for their films.

In fact, the global market for animated content is booming, according to Rob Salkowitz, a Hollywood and entertainment reporter at Forbes. 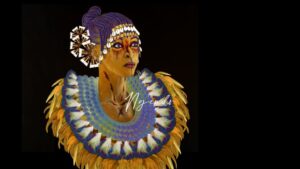 “There is an incredible demand for animated content right now. This was true even before the pandemic because the streaming networks are really hungry for new content; and animation is a great way to get viewers from all different audiences,” he says.

Demand has increased during the pandemic, as live productions were shut down or limited to socially-distanced teams.

“We are seeing a ripple effect,” he says.

With advertisers and other video producers unable to film in the field, those who can afford it, are turning to animation to fill the gap.

“That’s putting a lot of demand on the pipeline,” he says. “Because professional animation studios are suddenly getting offers they can’t refuse from other, non-traditional clients.”

But while more animators are joining the profession in Africa, many are facing an obstacle to getting their content on local screens.

The African Animation Network hopes to overcome that problem by launching its own TV network – if it can attract enough investment. 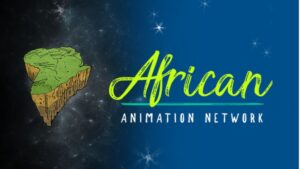 “Broadcasters are not incentivised to invest in the local industry because they can turn a profit on really cheap [foreign] content,” he says.

The channel is currently in a pilot phase and is set to launch in the next few months.

“We’re on that precipice of being potentially a thriving and sustainable industry,” says Nick Wilson.

How to Attract Private Finance to Africa’s Development

Biden’s presidency opens the door for bigger economic relations between Ghana and America.