The ENI Group has announced that it has made significant oil discovery in Ghana.

According to the Group, the discovery was made in Block 4 offshore Ghana.

A statement issued by the Energy Ministry, said “the well that led to the discovery is located approximately 50 kilometers off the coast and about 8 kilometers north-west of the Sankofa Hub where John Agyekum Kufuor FPSO is located.”

It added that “the well deliverability potential has been estimated at 5,000 barrels of oil per day, similar to the wells already in production from the Sankofa Field.”

Statement is as shown below: 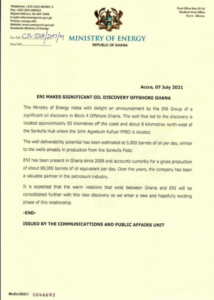