The global maritime report on piracy has for the second time in 2018, placed the Gulf of Guinea (GoG) on the red spot. According to the report, the GoG recorded the highest number of pirate attacks on vessels in the second half of 2018.

The first six months of this year saw a significant rise in the number of recorded piracy and robbery incidents in the region compared to the same period in 2017.

A recent report from the International Maritime Bureau (IMB) shows an increase in global piracy, with 107 incidents recorded in the first six months of 2018 compared to 87 in the same period in 2017.

A breakdown of the report further revealed that Nigeria recorded 31 attacks, closely followed by Indonesia with 25, while Bangladesh and Venezuela recorded seven attacks each.

Others are Republic of Benin and Ghana with five attacks each. According to the report, bulk carriers suffered the most in the attacks against vessels as 39 of such vessels were attacked since the beginning of the year.

Tanker vessels also recorded 30 attacks in the first six months of the year while passenger vessels recorded only one attack so far this year. On the number of attacks on vessels on anchorage, Nigeria led other countries with 14 of such attacks, followed by Indonesia with 11 and Bangladesh with seven recorded attacks.

This current report is a confirmation of the March 20, 2018 edition of the Graphic Business which highlighted the trend in the incidence of piracy in Ghana’s territorial waters

The Graphic Business report for instance showed that pirates freed three Koreans that were kept in captivity but have kept the Ghanaian and the Greek partner until now.

In the heat of the moment about 14 fishing companies that operate in the country’s waters halted their operations for fear of pirate attacks.

Within the last six months, Ghana has recorded five pirate attacks, compared to the 11 attacks between 2013 and 2017.

Across the world, in the first three months of this year, 100 crew members were taken hostage and 14 kidnapped from their vessels.

A total of 39 vessels were boarded, 11 fired upon and four vessels hijacked. IMB received a further 12 reports of attempted attacks. 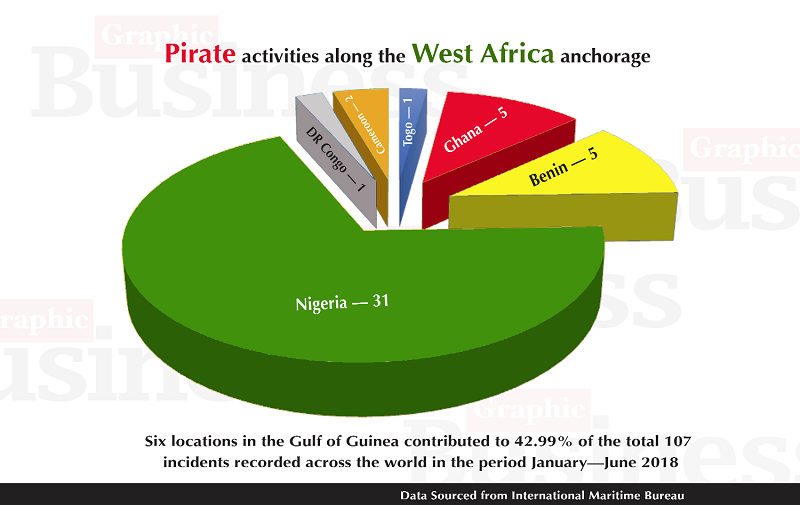 However, all 25 crew kidnappings reported this year are from six incidents in the Gulf of Guinea, off the coast of Nigeria, emphasising even further the higher maritime risks in this region.

Another positive development, however, is the IMB reports of fewer piracy and robbery incidents in piracy hotspots other than the Gulf of Guinea.

For instance, no incident was recorded off the coast of Somalia in the second quarter of 2018 and while the number of incidents reported by vessels at berth/anchorage in Indonesia and Bangladesh remains high, the situation in the Philippines has improved.

According to the report, abductions of crew from vessels in the Sulu-Celebes Seas and waters off Eastern Sabah have also improved, with no such successful incidents recorded in the first half of 2018.

But in a sharp contrast the Regional Cooperation Agreement on Combating Piracy and Armed Robbery against Ships in Asia (ReCAAP), the first six months of 2018 saw the lowest number of piracy and robbery incidents in Asia at that time of the year for the past ten years. — GB