Ghana’s economy contracted by 3.2 percent in the second quarter of this year, a decline from the 5.7 percentage growth recorded during the same period in 2019.

This represents the first time the economy has contracted in 37 years, since 1983.

At a press briefing, Government Statistician, Prof. Samuel Kobina Annim attributed the fall to some restrictions on activities in the economy, which came to a standstill during the partial lockdown period.

The country’s second quarter Gross Domestic Product (GDP), at current prices, that is the value of goods and services produced from April to June, increased to GHc 85.7 billion, when compared to the GHc 84.3 billion of value recorded for the same period in 2019.

The BoG’s Composite Index of Economic Activity (CIEA), measured on a year on year basis, contracted sharply in May 2020 by 10.6 percent. This is a complete reversal of the 5.6 percent growth in the index recorded over the previous 12-month period.

While the CIEA is not a direct measure of economic growth – it tracks changes in the amount of economic activity, as different from measuring changes in value added, which the Ghana Statistical Service uses for the official measurement of Gross Domestic Product growth – the two have tended to be quite closely correlated, rarely deviating from each other by much more than 100 basis points (one percentage point). 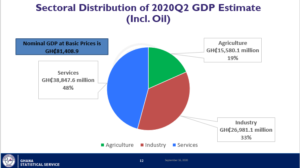