For the first time in more than two years, the consumer inflation has breached the upper end of the Bank of Ghana’s target of eight percent with a band of ±2 percent [6 percent to 10 percent], when the consumer price index recorded 10.6 percent year on year growth in April, 2020, data from the Ghana Statistical Services has revealed.

The current rate is the highest recorded since the rebasing of the indicator in August, 2019, being 2.8 percentage points higher than last month.

This sharp increase, although anticipated, will have a major influence in the decision the central bank will take this Friday, May 15, 2020, in terms of its benchmark Monetary Policy Rate, as well as its measures to mitigate the impact of the coronavirus outbreak  on the economy.

In requesting approval for financial support from the International Monetary Fund (IMF) in the form of a Rapid Credit Facility (RCF), government anticipated inflation to rise but remain below the upper band of the central bank target, as pressures from global supply chain disruptions and depreciation are partially being offset by lower fuel and food prices.

Databank in its macroeconomic flash note said, “The overshooting of BOG’s inflation target band strengthens our expectation of a HOLD MPR decision: At 10.6 percent, the Apr-2020 inflation exceeds the Bank of Ghana’s target range of 6.0 percent – 10.0 percent by 60bps. While we view this as a temporary overshooting of the target band, we believe there is cause for caution on liquidity injection. We therefore expect the monetary policy committee to leave the MPR unchanged at 14.50 percent,”

Consumer inflation, which remained flat for the past three months, increased largely due to the increases in the prices of food items during the period. Food inflation is the predominant driver of inflation, as it contributed 59.6 percent of the year-on-year inflation in April 2020. In the previous eight months this contribution was on average 44.1 percent.

Among the food items that accounted for the surge in average prices were cassava, gari, tomatoes, okro and garden eggs. 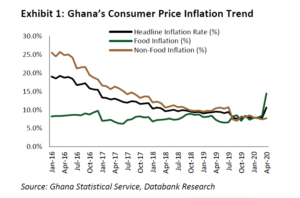 On the average the rate of inflation in regions that were directly hit by the partial lockdowns was 8.81 percent higher than the other regions.

Databank in its inflation outlook said, “The prevailing closure of Ghana’s land borders remains a disruption to supply chains amidst the ongoing planting season. While the seasonality in agricultural output in second quarter of 2020 pose an upside risk to food inflation, we believe the disruption to international supply chain heightens the risk.”