The GSE: How the Banks Have Performed in the Last Five Years

Interest rates, inflation, foreign exchange amongst others are factors to consider when making investment decisions in an economy.

Changes in these indicators directly and indirectly affect the performance of financial investments, especially the Ghana Stock Exchange (GSE) where various companies are listed.

Climate Change and Effects on Financial Stability: The Role of Ghana’s Financial Industry

We have however witnessed changes in the economic figures and news not having an impact on the GSE and vice versa partly because the sectors of the economy are not fully represented on stock market and the market not being efficient enough.

Out of 23 banks in Ghana, 8 are represented on the Ghana Stock Exchange, and these are the stocks that mainly dictate activities on the bourse.

In the year 2019, the Banking Sector had recorded the largest number of trades at 529 followed by the Distribution Sector at 203 and ICT 112.

The distribution sector is represented is by GOIL, Total Petroleum, Mechanical Lloyd and Produce Buying Company. GOIL recorded 83% of the number of trades while TOTAL recorded 17%.  The rest did not record any trades. GOIL is ahead of TOTAL Petroleum because of their consistency in profitability and dividend payments.

The food and beverage sector which is mostly led by Fan Milk Ltd recorded 98% of total trades on the GSE against 2% by Guinness Ghana Ltd. The increase in trades by Fan Milk is due to increase in sales and revenue over the period.

MTN Ghana, the largest stock on the Market is represented with Clydestone Ltd in the ICT Sector. Clydstone did not record any trade in 2019.

The finance sector recorded GHC4.2M in value of trades representing 25% of total trades. MTN Ghana recorded GHC11.9M, the highest in 2019.

The GSE is mostly driven by the banking stocks because of the safety assured resulting in the high number of trades it commands.

The banking sector in 2018 was a nervous period as investors were left in a state of disarray as to whether the banks were still the best sector to invest in. The banking sector crises started on the blind side of most investors as UT Bank, a listed entity at the time had its license revoked.  As the crises wore on through to the end of the year 2018 into 2019 activities in the GSE slowed down.

Prior the crises, the GSE has had mixed performance returning some appreciable returns to shareholders. In a year on year analysis, though it can be argued that the market has not done much in terms of creating value for investors, a careful analysis shows how investors have earned good returns by investing in the GSE, especially in the banking stocks.

Between 2015 and 2019 profits made by these banks have been quite mixed. Depending on the size of the bank, appreciable profits were declared.

From the graph shown above, 2019 generally was a good year for the listed banks as they recorded sterling performances within the period.

These performances are the result of the banking sector cleanup.

The profits translated into the dividends paid by the companies. The banks have been consistent in paying dividends. In 2018, CAL Bank, Ecobank Ghana, Standard Chartered Bank Societe Generale Ghana issued bonus shares at the ratios of 7:1, 10:1, 6:1 and 6:1 respectively. Republic Bank did a Rights Issue.

Ecobank Ghana solidified its position as the biggest bank in Ghana in assets when its asset grew to GHC13.2 Billion in 2019. GCB and SCB also grew by 17% and 28% respectively to GHC 12.4 Billion and GHC7.6 B.  Societe Generale, Republic Bank, ADB and Access all saw increases in asset values.

Capital gains on the GSE of the banks have been mixed.

Ecobank Ghana Ltd performance has been in positive territories. An investor who purchased the banking giant’s shares in December 2015 has returned 15.41% by December 2019 in capital returns. Within the period with some careful attention, investors would have earned higher. For example, investors who bought Ecobank Ghana shares in January 2018 earned 37% by June, 2018. GCB in the same period earned 33% whiles SCB earned 32%. Though holding on to these stocks throughout the period from 2015 to 2019 would have recorded minimal returns.

SCB returned 13% while GCB returned 35% between 2015 to 2019. Putting the dividends earned within the period into perspective increases the value of the returns. 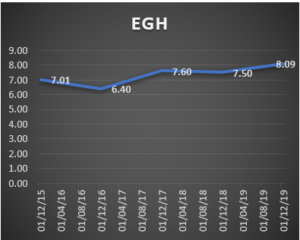 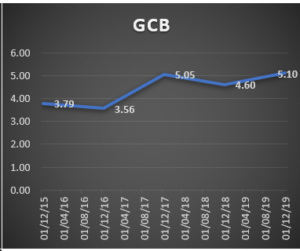 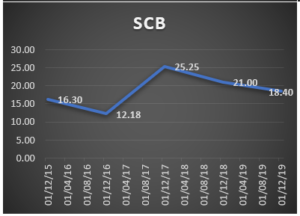 Other banking stocks that performed creditably well in terms of capital returns include ADB and Access Bank Ghana both returning 32% and 22% between 2015 and 2019. The lack of dividend payment by the two institutions pushes them lower the ladder.

2019 figures point to good prospects; GCB profits jumped by 30.29% from 2018, Standard Chartered Bank leaped 34% whiles Ecobank Ghana rose by 31%. The positive operational cash flows recorded for 2019, though lower than 2018 is an indicator the banks are positioned for greater performance going forward.

According to trends monitored on the Ghana Stock Exchange, price movements are generally activated by dividend payments and sound financial statements.

In April 2020, the Bank of Ghana “…directed banks and SDIs to desist from declaring or paying dividends and from making other distributions to shareholders for the financial years 2019 and 2020, unless the Bank of Ghana was satisfied, that such institutions met the regular prudential requirements and were not relying on the additional liquidity released by the regulatory reliefs provided by the Bank of Ghana.”

Even though this directive made some shareholders unhappy because of the hold up of cash to them, it is expected to put the banks in a stronger position to protect customers and other stakeholders in the long term.

GCB Bank, Standard Chartered Bank and Ecobank Ghana are the top picks when choosing which stocks to invest in. Their consistency and solid performance in terms of profitability, dividend payments, solvency as well as creating value for shareholders puts these stocks ahead of the other banks.

Though Covid 19 is will suppress business activities within the banking sector, banks are expected to contain the shocks to remain solid and viable in the coming years due to the work done by the Bank of Ghana within the sector.

Young Investors Network (YIN) is a financial education organization with a commitment to educating the youth in financial literacy, business skills and dedicated to preparing the next generation of investors.  Its mission is to inspire youth to be outstanding investors – investors in companies, investors in their communities, and investors in themselves. Please visit www.younginvestorsghana.org for more.

Climate Change and Effects on Financial Stability: The Role of Ghana’s Financial Industry