The Nissan Rogue is one of the best-selling compact crossovers on the market, with a solid mix of handsome styling and comfortable accommodations. It’s also Nissan’s most popular model, outselling the Altima and the Sentra sedans. Still, the 2020 Rogue underperforms compared with the segment’s many more desirable alternatives. Its four-cylinder engine struggles to move the hefty crossover, which also feels heavy-handed to drive. However, it does afford a compliant ride and ample passenger space. The Rogue also offers a host of standard driver assists and infotainment features, but the entire package lacks the cohesion of premier rivals such as the Honda CR-V and the Volkswagen Tiguan. Although the 2020 Rogue may not rank among the best crossovers and SUVs, it’s a useful transportation device for modern families.

After Nissan made several driver assists standard and added some new packages for the previous model year, the 2020 Rogue carries over unchanged. However, every model does receive a small price increase and the hybrid powertrain has been discontinued.

Nissan Rogue Pricing and Which One to Buy

While the top-of-the-line Rogue SL boasts the best features, its price puts it above more desirable competitors such as the Honda CR-V and the Subaru Forester. That’s why we’d recommend the mid-level SV model. Those who need four-season capability can add all-wheel drive for US$1350. Every 2020 Rogue SV has standard amenities such as heated front seats, a power driver’s seat, dual-zone climate control, a motion-activated liftgate, and rear automated emergency braking. We’d also choose the US$1800 SV Premium package that adds luxuries such as a heated steering wheel and memory driver’s seat. Likewise, the kit includes technology such as a 360-degree camera system and Nissan’s semi-autonomous ProPilot Assist feature.

Noisy and reluctant can describe an unsettled stomach after a supersize value meal—or the Rogue’s gasoline powertrain. The 170-hp four-cylinder and continuously variable automatic transmission (CVT) is the standard setup. The CVT’s sluggish response and languid power delivery cause the engine to wail under heavy throttle; this powertrain seems to drag the Rogue around town rather than pull it. While a hybrid was previously available, Nissan dropped that powertrain after the 2019 model year. That leaves only the Toyota RAV4 and the Mitsubishi Outlander plug-in hybrid as the only hybrid choices in this class. The Rogue’s soft suspension provides a pleasant, relaxed ride, which is about the only compliment we can give. Its spongy ride compromises overall control, though, causing the crossover to bob and heave around corners taken at even relatively sedate velocities.

The EPA rates the Rogue among the most fuel efficient in its class. The front-drive model has estimates of 26 mpg city and 33 highway, while the all-wheel-drive version shaves 1 mpg off both ratings. However, the anemic gas-powered Rogue proved less economical than advertised during our real-world 200-mile highway fuel-economy test, delivering only 28 mpg despite its rating of 32.

The Rogue’s interior is a comfortable and attractive environment, and the Platinum Reserve Interior package takes it into luxury territory with caramel-colored leather seats—but it’s only available on the top-tier SL. Nissan’s Zero Gravity front bucket seats provide incredible comfort, although we’re surprised a power-adjustable passenger seat isn’t offered. The Rogue has excellent front-passenger space, but long-legged passengers may find the rear seats a bit pinched. 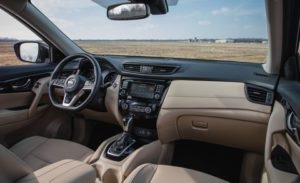 Every Rogue has a standard infotainment system with a 7.0-inch touchscreen—called NissanConnect—with Apple CarPlay and Android Auto capability. The touchscreen is surrounded by physical buttons, which are useful, but the setup lacks a home button. The screen is low-resolution, the menus are not structured intuitively, and the small labels make the buttons difficult to identify at night. All Rogues can be equipped with 4G LTE Wi-Fi as a dealer-installed accessory.

The Rogue can haul luggage with the segment’s best in class, as it held a similar number of carry-ons (22 with the rear seats folded) as the Kia Sportage and the Ford Escape. Impressive cargo volume with the seats up or down, along with decent cubby storage space, make the Nissan a practical instrument. Apart from the cabin’s cubbies and compartments, there is also Nissan’s Divide-N-Hide cargo system. It allows the rear floor to be raised or lowered, to be used as a shelf, or to cover hidden compartments. While we found it to be clumsy to use, it’s a creative and functional addition.

The 2019 Rogue did not perform well in crash-testing. It earned a four-star rating (out of a possible five) from the National Highway Traffic Safety Administration, and it was not named a Top Safety Pick by the Insurance Institute for Highway Safety. However, it has numerous standard driver-assistance technologies. It also can be equipped with ProPilot Assist, which uses lane-keeping assist and stop-and-go adaptive cruise control to help the driver accelerate, brake, and steer on the highway. Key safety features include: