Yesterday, with the official opening of a vehicle assembly facility in Accra, by President Nana Akufo-Addo, Ghana became the fifth Volkswagen vehicle assembly location in Sub-Saharan Africa; the other locations being South Africa, Kenya, Nigeria and Rwanda.
Universal Motors Limited, a licensed Volkswagen importer since 2005, has been awarded the assembly contract for the initial phase of the project. The Universal Motors facility in Accra has an installed capacity to assembly 5, 000 units per annum. The models to be assembled using Semi Knocked Down (SKD) assembly kits are Tiguan, Teramont, Passat, Polo and Amarok.

As evidence of the importance to government of the event to announce Volkswagen’s investment and unveil the first vehicle assembled in Ghana, it was attended by the President of the Republic of Ghana himself, Nana Addo Dankwa Akufo-Addo, Minister of Trade and Industry, Alan Kyerematen, and some other cabinet ministers. Government is seeking to make Ghana an automobile manufacturing hub for the West African sub region as a whole, and has similar agreements with both Toyota and Nissan.

Speaking at the unveiling ceremony on Monday, August 3, 2020 President Akufo-Addo said; “Volkswagen’s presence in Ghana has been facilitated by government’s bold move to develop the Ghana Automotive Development Policy under the auspices of the Ministry of Trade and Industry with generous fiscal incentives. 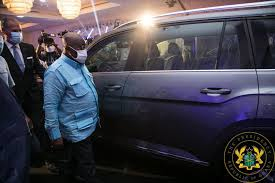 he President noted; “Additionally, the Minister for Finance has indicated that Government is going to establish an Automobile Industry Development Support Centre, which will, amongst others, co-ordinate the technical processes for licensing domestic vehicle assemblers and manufacturers, and monitor, also, their compliance with industry regulations and standards.”

“The Centre will also co-ordinate the implementation of an essential element of a viable automotive sector, that is the establishment of a Vehicle Financing Scheme, which will link financial institutions to individuals and groups interested in purchasing newly-assembled vehicles in Ghana. Furthermore, the Centre will carry out an Automotive Skills Enhancement Programme to provide requisite skills for the various categories of the value chain of the automobile industry,” he explained.

The official opening of the vehicle assembly facility in West Africa’s second largest economy, is the realisation of the Memorandum of Understanding (MoU) which Volkswagen signed with the Government of Ghana in the presence of the German Chancellor, Angela Merkel, nearly two years ago.

The Government of Ghana has also fulfilled its MoU by developing a comprehensive Automotive Industry Policy, the Ghana Automotive Development Policy (GADP)..

GADP has paved the way for Volkswagen to solidify its commitment in Ghana with the initial investment for the first phase of its long-term vehicle assembly plans which aim to help Ghana to develop a modern automotive industry as part of the country’s industrial transformation agenda.