Officials of the Ghana Cocoa Board (COCOBOD) have begun inspection of cocoa farms that are undergoing a pruning exercise in the country.

The process which involves thinning of tree branches and removal of old and dead stems is seen as imperative as it is estimated that cocoa famers are likely to experience between 15 percent to 20 percent increase in production of cocoa beans after the project ends this month.

Beside increase in yield, the exercise is expected to allow room for new growth of the branches which could potentially deter pest and animal infestation as well as promote the plant’s natural shape and healthy growth.

Already, the Board has supplied about 100,000 pieces of equipment and materials that are being used to undertake the project. They include secateurs, pruners, loppers among others.

“We have already supplied 100,000 mechanized pruners to assist farmers realize the objective of proper pruning”, he said.

The exercise also serves as a crucial avenue for COCOBOD officials to interact with cocoa farmers on the need to increase production of cocoa beans even at a time the novel Coronavirus pandemic is ravaging all global trading and business activities. 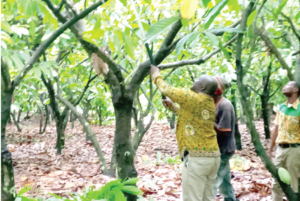 During the five day tour, COCOBOD officials first inspected some cocoa farms in the Wassa-East District of the Western Region. They include a 22-acre cluster of cocoa farm owned by 70 farmers at Kofi Eshia, the Kwabaa Cocoa Cooperative Farm as well as Anomawobidi Co-operative Farmers

The delegation again continued to the Tikobo No.2 forest in Jomoro District where 380 farmers have cultivated over 500 acreage of cocoa plantations.

Importantly, continuous and effective pruning of cocoa farms is expected to prevent a number of diseases including Black Pod Disease among others and the exercise also results in proper ventilation and exposure to sunshine to increase yield.