…as over 70 workers test positive

Railways Development Minister, Joe Ghartey, has revealed that ongoing rail construction which should have seen completion by end of August 2020, is on hold as over 70 railways construction workers have tested positive to the coronavirus.

The Minister who was speaking on the role of rail in multimodal connectivity and economic growth in Ghana, said the pandemic has significantly affected all rail projects across the country.

“Were about to do the 300 meters across the Volta river and the infamous COVID-19 came and affected the project. When the President announced the lockdown, he excluded railways and roads thankfully. But what happened was that over 70 workers in the camp got the virus,” he said.

He said, although the affected patients have so far recovered, construction work is yet to resume on the various rail lines. 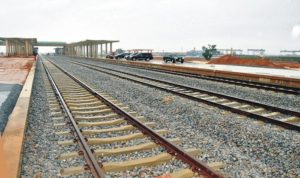 Government, according to the Railways Ministry, has adopted different financial modules for different segments of rail projects in the country due to the capital intensive nature of Ghana’s rail networks.

These financial modules include one that government will directly invest its money in, as well as parts which would be on a build, operate and transfer investment module by foreign investors who would bring on board capital, human resource expertise, and modern technology.

Currently, the Ministry has arrived at a shortlist of three foreign investors and one of them, would be selected in August this year, to construct the rest of the eastern line, completing it from Mpakadan to Paga.

The line will connect Ghana with the Sahelian regions where goods are expected to be transited to and from Ghana.

Indeed, government’s ,masterplan is also to extend both the central spine rail lines from Accra to Kumasi to Tamale and Paga to connect to the northern frontier and western rail lines in order to ensure interconnectivity of all lines.