Organized labour is becoming increasingly disgruntled by the effects of a combination of factors such as workers’ pay cuts, delayed salary payments and lately, continuous rise in consumer inflation amidst COVID-19, which are effectively cutting their real, disposable incomes significantly. Although organized labour has not sent formal notice of impending labour unrest, signals are emerging that workers may seek to take advantage of impending general elections to demand public sector relief which the private sector workers could then leverage on to demand wage increases of their own. Rising disgruntlement will worsen from July when government ends its 100 percent subsidy of water bills and 50 to 100 percent subsidy of electricity bills.

Prior to COVID-19, with the projected government inflation target of eight percent, workers were expected to get a net real increase of four-percentage point  in salary this year over the inflation rate.

Secretary General of the Trade Union Congress (TUC), Mr. Yaw Baah, during a forum to discuss the preliminary assessment of the impact of COVID-19 said, “inflation is almost at 12 percent and if the trend continues by the end of the year, living standards of workers will turn out to be very difficult.”

Consumer inflation, which measures proportionate changes in the prices of a fixed basket of goods and services that households in Ghana consume, for a second consecutive month in May 2020 recorded a rate well beyond the government’s and Bank of Ghana’s target of eight percent with a band of ±2 percent.

In May 2020, inflation was 11.3 percent, up from 10.6 percent recorded in April, 2020, representing an 0.7 percentage point increase. Importantly,, this was primarily driven by food inflation of 15.1 percent, itself led by vegetables and fruits and nuts, which made up about 60 percent of the average year-on-year inflation for the period. 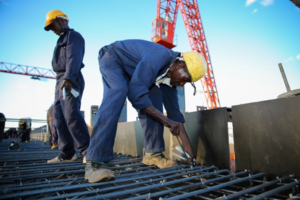 Further to this, last month, housing costs, which are made up of rents paid by tenants and refuse collection also contributed to the rising average inflation.

Some market watchers have said that the rising inflation of food, which is an essential commodity, will have dire implications on the living standards of most middle-class workers, among the general populace, most especially at a time that workers are suffering huge pay-cuts and delayed salary payments. This is because unlike most other sectors, food purchases are unavoidable and indeed make up nearly half of total spending by relatively poor households according to Ghana Statistical Service’s cost of living surveys. Thus sharply rising food inflation has an inordinately high adverse effect on households real spending power

In an interview with Goldstreet Business, the Director of Labour Research and Policy Institute at the TUC, Dr. Kwabena Nyarko Otoo said, “For most people in the public sector, their wages have been fixed. Hence, it will be difficult to go back for an adjustment. It is most likely that many people will suffer a decline in their real disposable income.”

“But of course, we are in a crisis, everybody must adjust one way or the other. Everybody must bear a certain portion of the cost, because some people have lost their incomes all together,” Mr. Otoo maintained.

Board Chair of Minerals Commission Honoured

China to waive some African loan payments due this year, Xi says