Despite a 34.48 percent decrease in the number of cyber fraud cases from 174 cases in 2018 to 114 cases recorded in 2019, cyber fraud related activities in the banking sector still accounted for the highest value of attempted fraud among the various genres, amounting to GH¢50.54 million, with actual losses being Ghc14.31 million. 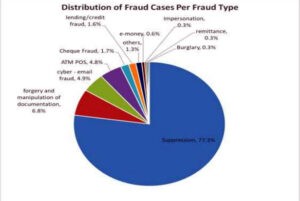 Overall, the banking industry reported a total number of 2,295 fraud cases in 2019 as against 2,175 cases reported in the previous year under review. This represents an increase of 5.4 percent in the cases recorded in 2018.

The increase according to the BoG was as a result of advanced technologies introduced into the banking sector.

“The various forms of advanced technologies adopted by financial institutions have made the banking sector more susceptible to various risks such as phishing, identity theft, card skimming, vishing, email fraud and more sophisticated types of cyber-crime”, the report noted.

Aside cyber fraud, other types of fraud reported to the central bank included Suppression of cash/deposits; Forgery and Manipulation of Documentation; Cheque Fraud; Remittance Fraud; Automated Teller Machine /Point of Sale Fraud among others.

To decrease fraud related cases in the sector, the BoG has directed Banks, Special Deposit-Taking Institutions, Electronic Money Issuers and Cheque Printing Companies that their contract or temporary staff must be adequately vetted by the Police Service in order to curtail the practice of employing fraudsters in the industry, adding that, licensed institutions are required to strictly monitor all their staff.

Tullow Ghana Partners with Invest in Africa to train Suppliers