Tourism Minister, Barbara Oteng Gyasi and Senior Minister Yaw Osafo Marfo were present at the launch of the fund

The Ministry of Tourism, Arts and Culture (MoTAC) has deepened government’s resolve to diversify the leisure tourism offerings of Ghana by identifying and upgrading the most promising tourism destination areas and attractions within the country.

Instructively, a significant chunk of the recently launched US$9 million World Bank grant from the International Development Agency (IDA) for tourism small and medium enterprises (SMEs), as part of the Ghana Tourism Development Project would be used for that purpose.

The project is led by the Tourism Ministry in collaboration with the Ghana Tourism Authority, and other key partners.

Indeed, tourism sites and attractions have seen little development and rehabilitation in recent years and that, has made them unattractive to both domestic and international patrons alike.

The Kintampo Waterfall, which has seen significant facelift in 2017, was even as a result of a recorded accident where over 18 pupils lost their lives during an excursion. 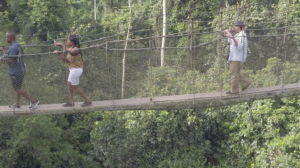 Admittedly, Tourism Minister, Barbara Oteng Gyasi at the launch of the grant, said, “significant investments would be made into tourism sites that show substantial public goods requirements and circuit-tourism potential, and can draw increased demand from both domestic and international visitors”.

With the above mentioned criteria, it is expected that tourism attractions in the Ashanti Region, Eastern Region, Volta Region and the Central Region would witness significant facelifts considering the fact that these regions have more than two or more major tourist destinations located in different towns but on the same traveling route, thus, fitting perfectly into a circuit tourism potential category.

Albeit, some of the money, according to the Ministry, would be used to strengthen and creates an enabling environment to address the human resource needs of the industry, tourism branding and marketing, tourism enterprise support and for projects management in the tourism sector.

The Tourism Ministry has therefore engaged a grant management firm, which name, it did not disclose. A five-member grant committee has also been put in place to supervise the execution and disbursement of the money in the next few weeks.

NCA vs MTN moves to the courts