The National Board for Small Scale Industries (NBSSI) has warned the public against fraudsters and middlemen parading as Business Advisory Service staff for accessing government’s COVID-19 stimulus package.

The NBSSI disclosed that some corrupt persons are duping unsuspecting business owners by collecting money from them under the guise of registering them to access the government’s GHc600 million stimulus package.

The caution was made following reports that some applicants of the loan are being charged between GHc200 and GHc250 to access the soft loans announced by the government to mitigate the plight of business owners whose operations have been affected by the COVID-19 pandemic.

But Deputy Director for the NBSSI, Anna Armo-Himbson, said the application process for the Coronaravirus Alleviation Program (CAP) is free of charge 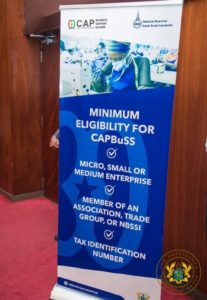 She hinted that the security agencies have been informed about the operations of the perpetrators and will be swiftly prosecuted once arrested.

Out of the GHc1.2 billion earmarked for CAP, GHc600 million will be disbursed as soft loans to Micro Small Medium Scale Enterprises, with a one-year moratorium and a subsequent two-year repayment period.

Government itself has stated that major requirements to be met by MSMEs in order to access a loan under the package include: the business or  individual must first be associated with a recognised trade group, have a Tax Identification Number (TIN) and also own either a bank account or a mobile money account.

GCNet to shut down at Tema Port today