The continuous increase demand for gold as a safe haven for investors in the current times of global economic uncertainty, has driven producer inflation for  April 2020 upwards to 7.4 percent, representing a 0.6 percentage point increase relative to the rate recorded in March 2020 of 6.8 percent, data from the Ghana Statistical Service (GSS) has shown.

The mining and quarrying sub-sector’s producer price inflation increased by 14.3 percent over the March 2020 rate of 23.7 percent, to reach 38.0 percent in April 2020.

The Government Statistician Professor Samuel Kobina Annim noted, say; “In the context of the producer inflation, the increase of 0.6 percent on year on year basis and  3.6 percent on a month on month basis, is mainly attributed to changes in the price of gold.  One has to be circumspect in attributing the changes in PPI to domestic COVID-19 related issues.”

Aside the effects of the novel coronavirus, which has influenced the sentiments of investors, the World Gold Council has stated that other principal factors driving the price of gold include the current trade tensions between the US and China, which has encouraged investors to return to gold as a traditional hedge in times of turmoil

Further to this, the persistently low interest rates on the major international financial markets have reduced the opportunity cost of holding gold and highlighted its attributes as a source of genuine, long-term returns, particularly when compared to historically high levels of global negative-yielding debt.

The Council also indicates that a surge in interest in gold among central banks across the world, commonly used in foreign reserves for safety and diversification, has encouraged other investors to consider gold’s positive investment attributes. 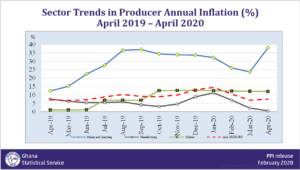 The producer inflation for Manufacturing which constitutes more than two-thirds of the total industry decreased by 1.6 percentage points to record 0.5 percent.

The utility sub-sector recorded an inflation rate of 12.1 percent for April 2020 indicating a decrease of 0.1 percentage point from the March 2020 rate of 12.2 percent.