The completion of the December 7 general elections which has seen incumbent President Nana Akufo-Addo re-elected for a second four year term in office, was supposed to be a cause for celebration for the business community which has tacitly supported the macro-economic policies of the incumbent administration , if not the government itself. But the political log jam confronting the country following the refusal of the opposition National Democratic Congress to accept the result, plus the real prospect of a hung Parliament is taking a lot of the shine off the elections. All this however will not have a major impact how their operating environment can be expected to evolve in 2021. 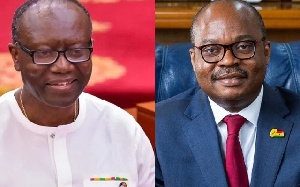 To be sure, the international business and investment community is happy that the incumbent administration will stay in office – although their local counterparts are more divided in their enthusiasm levels.

International investors with an interest in Ghana seem to have more confidence in the Akufo- Addo administration than one that would have been put together by John Dramani Mahama in the event that he had won the election.

Importantly Fitch, one of the three credit ratings agencies that track’s Ghana’s sovereign credit worthiness, has in collaboration with JP Morgan Emerging Market Bond Index asserted that some sub Saharan African bond issuers including Ghana will be able to issue new tranches of Eurobonds shortly. Fitch claims that the international investment community will be enthused by the re-election of President Akufo-Addo because they have confidence in his macro-economic management.

Similar positive sentiments have emanated from several financial analysts in major financial intermediation and investment banking institutions around the world.

For instance, Simon Quijano-Evans, chief economist at London-based Gemcorp Capital LLP says the markets will probably award the incumbent government the benefit of the doubt, given their track record of recent years. He asserts that: “The current government’s fiscal plan makes sense as a baseline scenario and markets will probably judge performance on a quarterly basis. Securing credibility in the fiscal space will help lower interest costs” to support growth and job creation.

Similarly, Kevin Daly, portfolio manager at London-based Aberdeen Standard Investments predicts that all issues related to debt, including the need to increase tax revenue, “are likely to be addressed quicker by the incumbent party as they can hit the ground running.” He enthuses that the government’s deficit plan for 2021 is “positive.”

Mark Bohlund, senior credit analyst at REDD Intelligence notes that “Most of the fiscal slippage occurred during the NDC’s time in office.”

Nana Adu Ampofo and Kobi Annan, analysts at U.K. and Ghana-based Songhai Advisory says that “The NPP deserves credit for the economic successes maintained between 2017 and 2020 pre-Covid-19,” Expressing relief at the out turn of the election he notes that reorganization of debt on the heels of an NDC victory would introduce waste “at a time when the country can ill afford it.”

However they all acknowledge that the President Akufo-Addo administration will have a huge task ahead of it during its second term.

So do their local counterparts who however are not quite as confident as to the incumbent’s administration to take them along in its efforts at accelerating Ghana’s economic growth and development.

Of course, the local business community comprises supporters of both major political parties – the victorious New Patriotic Party and the defeated National Democratic Congress – and in a country where political patronage by an incumbent government which is far and away the biggest spender, is crucial, supporters of the NDC are no doubt disheartened that their easiest way to increased business revenues and profits has been shut in their faces.

But there is also an economic reason: the incumbent government is more inclined to do business with major international corporations and portfolio investors than their recently defeated political opponents who are more dedicated to local content and participation in the workings of the economy. The returning administration traditionally prefers a strategy of local enterprises partnering international businesses that are laden with capital, technology and access to global markets – rather than promoting local business to take up market share from their foreign counterparts – and such local partnership roles are not open to all and sundry.

Actually this is in part why the international business community is elated that the incumbent government has been re-elected. However the other reason for this is more crucial: attracting the international trade and investment community requires macro-economic stability above all other considerations and this will be the priority for the President Nana Akufo Addo administration next year. Indeed the President himself has affirmed that the restoration of macro-economic stability and its subsequent maintenance will be his biggest economic priority during his second term in office.

In 2021 in particular this means a return to sustainable fiscal deficits as quickly as possible. It is instructive that while the NDC had been targeting a double digit fiscal deficit for its first year in office had it won the election, because of the peculiar fiscal circumstances imposed by COVID 19 this year, the incumbent government has already announced a fiscal deficit target of 8.6 percent for 2021 as the first stage of a three year road map towards returning the deficit to under 5.0 percent as required by the (currently suspended) fiscal responsibility act.

Bringing the deficit down from 11.8 percent expected as the 2020 outcome to 8.6 percent will require major fiscal consolidation but it has the advantage of already being in power so it can avoid significant political transition costs. Besides, since it is starting a second term, it will not see the need for expansive public spending to reassure the electorate that it made the right choice on December 7.

This commitment to fiscal consolidation, supported by its successfully tried and tested policies towards cedi exchange rate stability and the curbing of inflation can be expected to provide macro-economic stability even as the economy strives to rebound from the inevitable slow down imposed by COVID 19 this year, with growth expected to not be more than 2.0 percent.

Actually, the confidence of the international business community in the incumbent government will be pivotal towards achieving economic performance that justifies that confidence. Crucially, government plans to issue somewhere between US$3.5 billion and US$5.0 billion in Eurobonds before the end of the first quarter of 2021 and the success of that issue will largely determine whether Ghana will have enough gross international reserves to sustain the confidence of the foreign exchange markets.

This could be tricky – this will be the first Eurobond issuance  done with Ghana having a public debt to Gross Domestic Product ratio of over 70 percent, generally interpreted as an unsustainable public debt level – but the comments of the international portfolio investment community and credit risk analysts such as Fitch, both before and after the election results were announced, clearly indicates that there is enough confidence in the incumbent government for the bond sale to be fully subscribed.

Added to the already long term high levels of Ghana’s gross international reserves, which have remained above US$8 billion (enough to cover over four months import bill) and the Bank of Ghana’s periodic forward forex auctions which have pulled the rug from under the feet of currency speculators, a successful Eurobond issuance early next year can be expected to ensure relative exchange rate stability in 2021 barring any sudden external economic shocks.

In turn this will be pivotal in ensuring that the central bank’s objective of returning inflation to the median of its target band of between 6.0 percent and 10 percent by the second quarter of 2021 is achieved. With inflation falling to around 8.0 percent before mid 2021, Ghana’s business community can expect interest rates to fall a notch, especially with government’s own fiscal deficit financing needs declining compared with 2020 requirements

Importantly, government sees the potentials for spurring economic growth through expansionary economic policy while at the same time reining in the fiscal deficit. Bank of Ghana Governor Dr Ernest Addison has explained that the inordinate fiscal deficit for 2020 has not translated into macro-economic instability in the form of runaway inflation and sharp cedi depreciation because the Ghanaian economy is still operating below capacity due to the slump in economic activity levels imposed by COVID 19.  Government now hopes to ride on this under capacity situation to spur economic activity without generating higher inflation and exchange rate instability in 2021.

This though will require carefully measured expansionary policy financed largely by private capital. Indeed, the start to the ambitious GHc 100 billion Ghana CARES programme will be slow in 2021, with government expecting private investment to front load spending under the programme while it struggles to cut its own fiscal deficit so as not to let the public debt climb higher.

Government has lined up a wide array of economic policy initiatives for its second term but in 2021 priority will be given to efforts that can establish Ghana as a services hub for the African Continental Free Trade Area, AfCFTA. Here, the focus will be on establishing Ghana as a regional hub with regards to financial services, mining, aviation and logistics, petroleum and automobile assembly.

An area of uncertainty for 2021 though is that of legislation. The incumbent government had been on the verge of passing three key legislations relating to business activity in 2020 but the combination of COVID 19 and political considerations persuaded it to stay its hand until after the just concluded elections. These are; a review of Ghana’s investment law; a revised mining law; and a new insurance law. With Parliament now closely split between the ruling party and the largest opposition party, passing these legislations will be harder than before and the incumbent government will be ruing missed opportunities by now.

Nevertheless, the re-elected government will be focusing on restoring balance to its finances next year while preparing the grounds for the several new economic initiatives espoused in its 2020 election manifesto. Therefore corporate Ghana should not expect ground-shaking change in 2021. Next year will be devoted largely to steadying the fiscal/economic ship.