The COVID-19 pandemic has pushed the world into a recession. For 2020 it will be worse than the global financial crisis. The economic damage is mounting across all countries, tracking the sharp rise in new infections and containment measures put in place by governments.

China was the first country to experience the full force of the disease, with confirmed active cases at over 60,000 by mid-February. European countries such as Italy, Spain, and France are now in acute phases of the epidemic, followed by the United States where the number of active cases is growing rapidly. In many emerging market and developing economies, the epidemic appears to be just beginning. 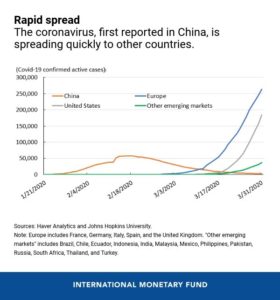 In Italy, the first country in Europe to be severely hit, the government imposed a national lockdown on March 9 to contain the spread of the virus. As a result, attendance in public places and electricity use have declined dramatically, especially in the northern regions where infection rates have been considerably higher. 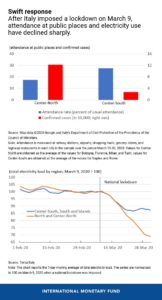 The economic consequences of the pandemic are already impacting the United States with unprecedented speed and severity. In the last two weeks in March almost 10 million people applied for unemployment benefits. Such a sharp and staggering increase has never been seen before, not even at the peak of the global financial crisis in 2009. 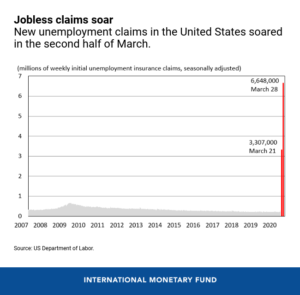 Disruptions caused by the virus are starting to ripple through emerging markets. After showing little movement early in the year, the latest indices from purchasing manager surveys (PMIs) are pointing to sharp slowdowns in manufacturing output in many countries, reflecting drops in external demand and growing expectations of declining domestic demand. On a positive note, China is seeing a modest improvement in its PMI after sharp declines early in the year, despite weak external demand.

The modest improvement in economic activity in China is reflected in daily satellite data on nitrogen dioxide concentrations in the local atmosphere—a proxy for industrial and transport activity (but also the density of pollution as a by-product of fossil fuel consumption). After a steep decline from January to February during the acute phase of the pandemic, concentrations have increased as new infections have fallen, allowing China to gradually relax its strict containment measures. 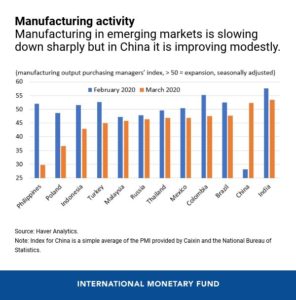 The recovery in China, albeit limited, is encouraging, suggesting that containment measures can succeed in controlling the epidemic and pave the way for a resumption of economic activity. But there is huge uncertainty about the future path of the pandemic and a resurgence of its spread in China and other countries cannot be ruled out.

To overcome this pandemic, we need a global, coordinated health and economic policy effort. The IMF—in collaboration with other partners—is doing everything it can to ensure rapid support is available to impacted countries through emergency financing, policy advice, and technical assistance. 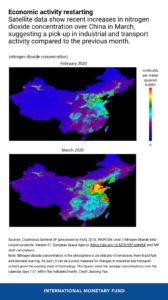 We will have more details on the economic impact of the COVID-19 pandemic when the IMF releases its World Economic Outlook on April 14.